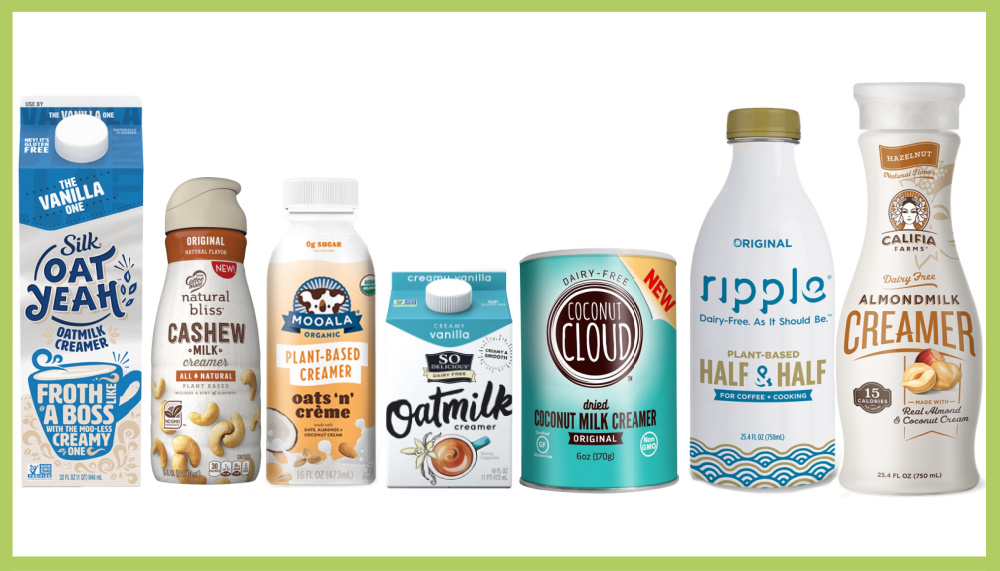 When coffee-lovers go vegan, one of the biggest adjustments they have to make is finding a new way to flavor their coffee.

If you’ve been drinking black coffee for far too long and are searching for a vegan coffee creamer alternative, check out the list below to find 14 plant-based coffee creamer options and where to find them!

Plant-based food companies have all but completely overtaken the milk industry. With so many dairy milk alternatives, more people are drinking plant-based milk than ever, including non-vegans. Almond milk just rocks!

However, this isn’t the same story for plant-based coffee creamer.

Plant-milk is easier to make because creaminess doesn’t really matter. Making plant milk creamy can be challenging, and often other thickeners have to be added.

Nonetheless, many companies have given a shot at making vegan creamer, so there is no shortage of options to choose from! You just might have to look at different stores or order online to find your favorite.

There are two different types of vegan coffee creamer: liquid and powdered.

Vegan liquid coffee creamer has a shelf life that is generally the same as almond milk. Unopened, it will last a while (usually a few months), but once it is opened, you have a week and maybe a few days to use it before it goes bad.

Most liquid vegan coffee creamer brands have to be refrigerated both before and after opening, but a few brands are shelf-stable until you open them.

If you can finish a bottle of creamer in about a week, liquid coffee creamer is probably the better choice for you, as it will give you a fresher taste and blend into your coffee easily.

Vegan powdered coffee creamer, on the other hand, will last a lot longer—opened or unopened.

So if you’re slow at going through your coffee creamer (like me) and end up dumping a lot down the sink, powdered creamer might be the right choice for you.

However, some of the most common complaints about powdered creamer are that they don’t taste as fresh as liquid coffee creamer and they tend to clump up instead of dissolving.

When a creamer brand says “dairy-free,” it can be vegan, and you should look into it, but it doesn’t guarantee that it is vegan.

Watch out for creamers that are labeled “lactose-free.” These are almost always not vegan, because it usually means that it was made from dairy milk and the lactose (the sugar in dairy milk) was removed.

If you’re looking for vegan coffee creamers online or in your local store, check this easy guide to make sure they’re vegan and available to you!

This guide is for informational purposes only. All ingredients are subject to change, so be sure to always read ingredient labels before purchasing and contact manufacturers with any questions. 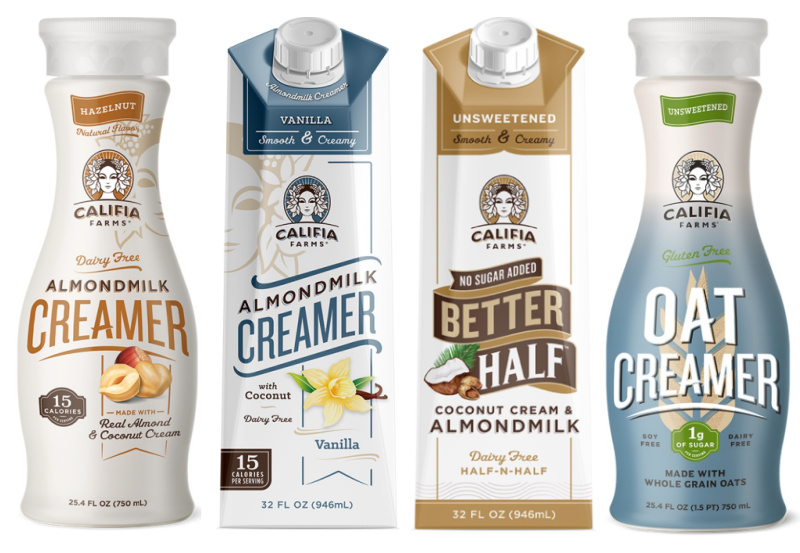 All of Califia Farms coffee creamers are vegan! This brand is dedicated to making entirely plant-based products that are both nourishing and delicious. It’s easily one of the most popular vegan coffee creamer brands.

All Califia Farms products are 100% plant-based, non-GMO, carrageenan-free, gluten-free, vegan and made with no artificial ingredients.

Where to Buy: You can buy Califia Farms products at Walmart, Amazon, and many other retailers.

Coconut Cloud is focused on replacing dairy products with coconut! All of their vegan creamers are a powdered, “minimally processed dried coconut milk powder,” according to the Coconut Cloud website.

You can purchase single-serve packets to take with you when you travel, or you can buy a larger bag or can to store in your cupboard. All of their coconut creamer options are vegan!

Where to Buy: You can buy Coconut Cloud products from Amazon or on their website, Vitacost, Lucky’s Market, Whole Foods, Sprouts, Safeway, Publix, Albertsons, Safeway, United Supermarkets, and Lucky California. 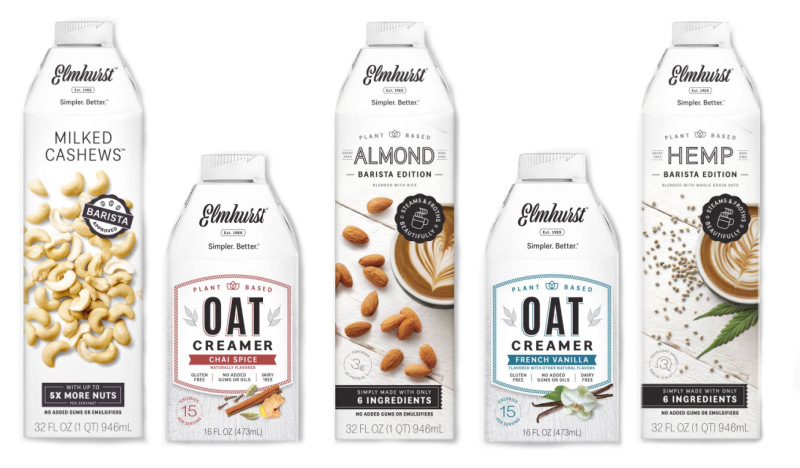 Elmhurst vegan coffee creamer comes in two different varieties: oat and hemp. All of their coffee creamers are in liquid form and shelf-stable until you open them, and they last for 7–10 days after opening!

Where to Buy: You can buy all Elmhurst products on their website or in bulk on Amazon, but finding their creamers in-store can be a bit tricky.

Their plant-milk is found in many stores, but you might have to go to a health-focused store like Sprouts to find their creamers. When in doubt, use the Elmhurst store locater and filter by the product you want to buy! 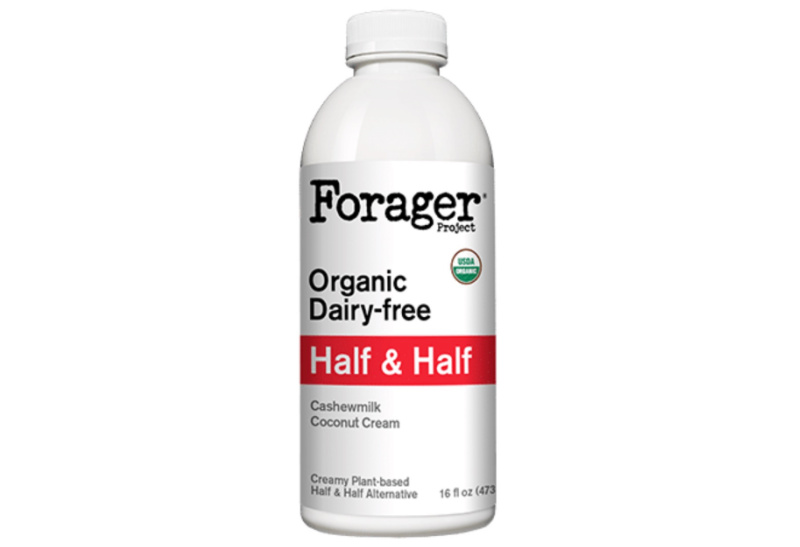 As of now, Forager Project only has one vegan creamer option: Organic Dairy-Free Half & Half. It is made from cashews and coconut cream.

Where to Buy: You can buy Forager Project creamer online from Amazon, Instacart, FreshDirect, Good Eggs, Thrive Market, and Peapod. You can find their creamer at Sprouts, Whole Foods, The Fresh Market, Kroger, Giant Eagle, Publix, and more!

Laird Superfood creamers are all vegan and are created using whole-food ingredients! All of their plant-based creamer options are powdered and have a long shelf life!

Where to Buy: You can buy Laird creamers online on the Laird Superfood Website or on Amazon. You can also find it at many retailers, including Walmart, Whole Foods, and Sprouts. 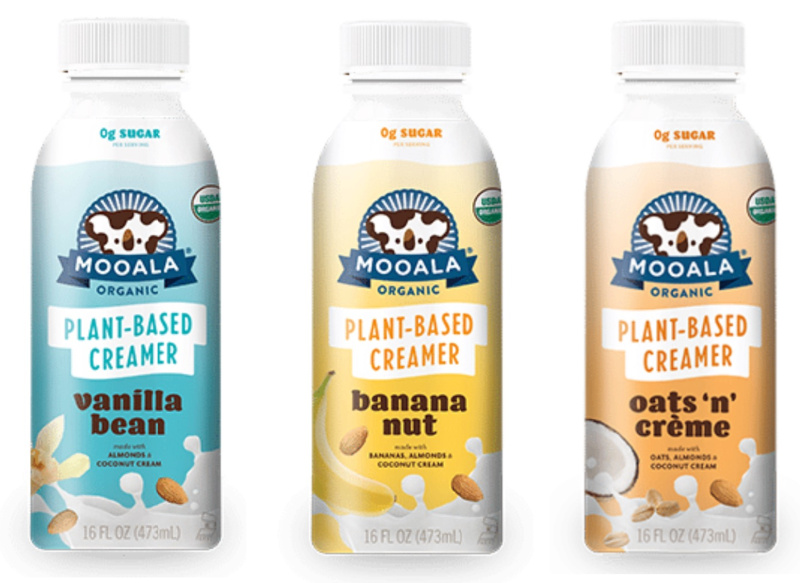 All Mooala Cramers are vegan and organic! They offer three different flavor varieties and are found in many different stores, so you’ll have no problem finding one you want to try!

All Mooala coffee creamers need to be refrigerated, so, unfortunately, they can’t be ordered online unless you can get them in under an hour. Look for them in the refrigerated section at your grocery store!

Where to Buy: You can buy Mooala creamers at many grocery stores, including but not limited to: Whole Foods, Winn Dixie, The Fresh Market, BJ’s, Publix, Kroger, HEB, and more! 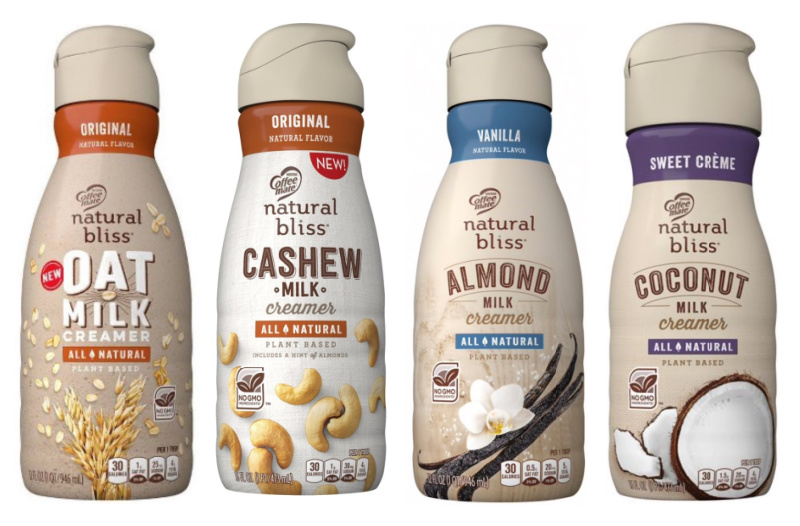 Here is where we run into some trouble. While many plant-based creamers are labeled vegan (because that’s who they’re marketing to, right?), the Natural Bliss Plant-Based Coffee Creamers are not labeled vegan nor certified vegan.

But, this doesn’t mean that it’s off the list — we just have to do a bit more investigating to find out if these products are suitable for a vegan diet.

Of course, we’re not talking about the Natural Bliss dairy creamers, but the non-dairy creamers listed on their website.

Their non-dairy Natural Bliss creamers are definitely plant-based but are not guaranteed vegan because they contain cane sugar, which is not always vegan. The natural flavor is not a concern, as they state on their FAQs that they are plant-derived.

It’s up to you if this creamer fits your lifestyle, but I wanted to include this brand on this list because it is definitely plant-based.

Where to Buy: You can buy Natural Bliss creamers any retailer that also sells Coffee-Mate creamers, such as Walmart, Publix, Kroger, Winn Dixie, Whole Foods, and more. 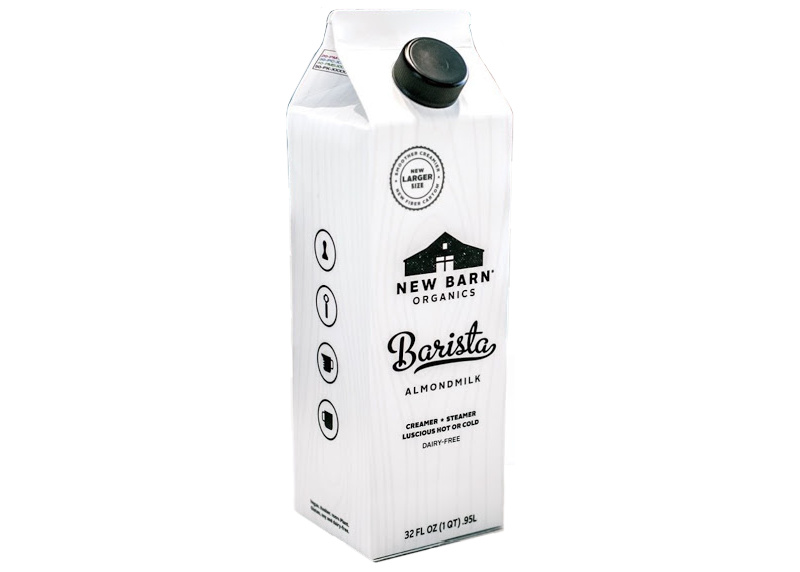 There is only one variety of New Barn coffee creamer, the Barista Almondmilk, but according to their website, it has everything you need and nothing that you don’t!

Created specifically for coffee, New Barn almond creamer gives you the opportunity to enjoy a creamy cup of coffee or to add a layer of foam by frothing it. And, it’s made with only organic ingredients!

Where to Buy: You can buy New Barn vegan coffee creamer at Whole Foods, Target, and more! 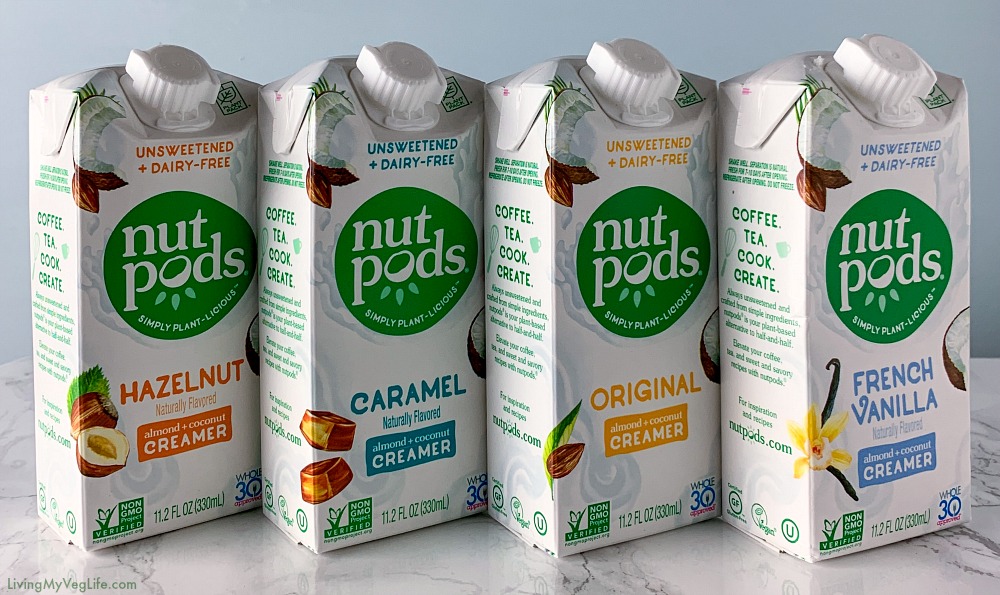 All of Nut Pods Creamers are vegan-friendly, and there are many different flavors to choose from! All varieties are shelf-stable until opened and then must be refrigerated.

Nut Pods almond and coconut creamers are made with a maximum of nine ingredients, and the packaging is made with up to 95% plant-based renewable materials!

Where to Buy: You can buy Nut Pods vegan coffee creamers online from Amazon, Natura Market (Canada), and Thrive Market. You can also find these coffee creamers in-store at many retailers, such as Publix, Sprouts, Target, Kroger, Whole Foods, and more! 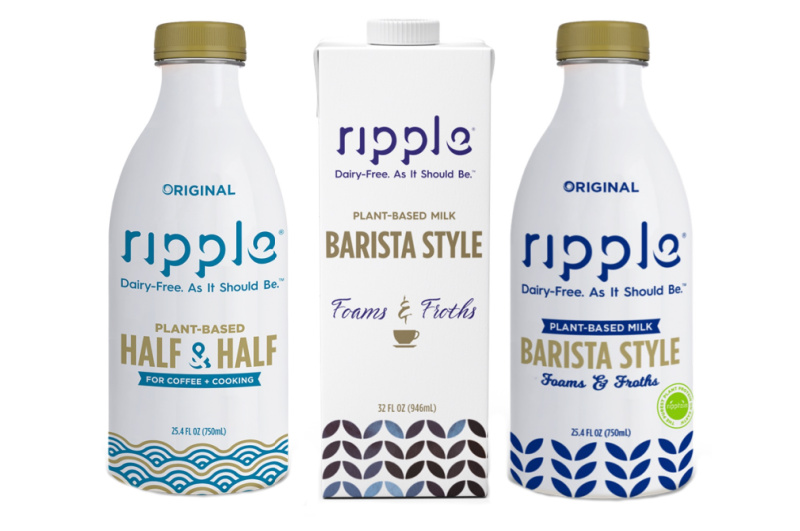 All Ripple products are vegan, and they give you two options to add to your morning cup of coffee: plant-based half & half and barista-style plant milk!

According to the Ripple Foods Website, the half & half is rich and creamy, but the barista-style plant milk will foam and froth. But, both are made for coffee and made with pea protein!

Where to Buy: You can buy Ripple Barista-Style Creamer creamer online from Amazon because it’s shelf-stable, but you have to buy their plant-based half & half in a grocery store because it requires refrigeration. You can find this product at many retailers including Walmart, Sprouts, Target, Publix, Whole Foods, and more! 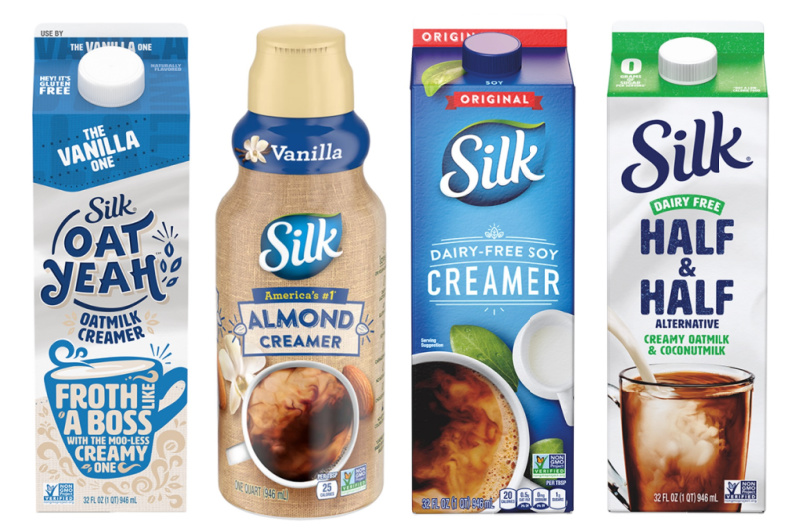 We all know of Silk plant milk, but did you know this brand also makes many different varieties of vegan coffee creamers? From almond, oat, soy, to half & half, Silk has a plant-based coffee creamer for you.

Silk also owns the “Oat Yeah” variety of oat milk creamer, which they claim “froths like a boss” on the Silk Website.

Where to Buy: You can buy Silk Vegan Creamers at many major retailers, including Walmart, Publix, Target, as well as other retailers like Rite Aid, Dollar General, Sprouts, and more! It’s one of the most popular brands and should be easy to find. 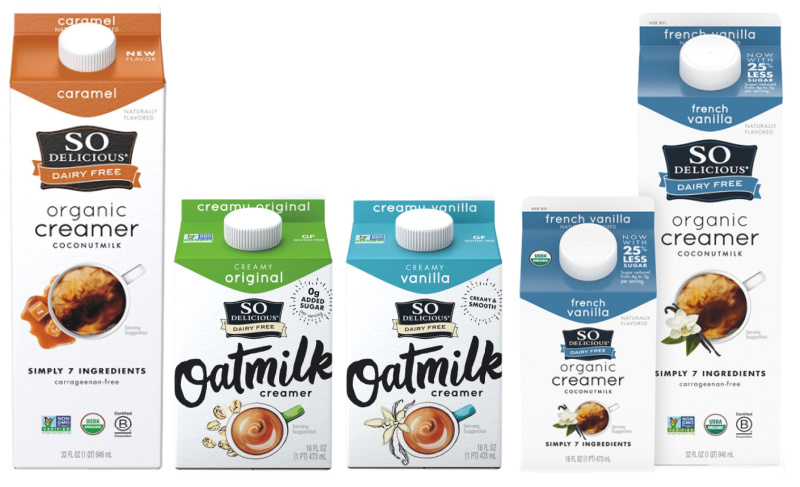 So Delicious coffee creamers are all certified vegan and non-GMO. Choose between their coconut creamers and oat milk creamers, which both have different flavor options!

Some varieties of So Delicious coffee creamer come in small cartons — perfect for someone who likes a light cream in their coffee and doesn’t want to waste!

Where to Buy: You can buy So Delicious Vegan Creamers in-store at Target, Publix, Sprouts, Whole Foods, and more!

Unlike the other vegan creamer brands, Trader Joe’s vegan creamers are their own brand and only sold in TJ’s stores. But if you have one near you, they are usually cheaper than other brands!

All three of TJ’s plant-based creamers are vegan-friendly and packaged in small cartons. Two require refrigeration and one is shelf-stable until opened!

If you liked this guide, check out my other Vegan Brands Guides!

If there is a brand of coffee creamer you want me to review and add to this list, let me know in the comments below!