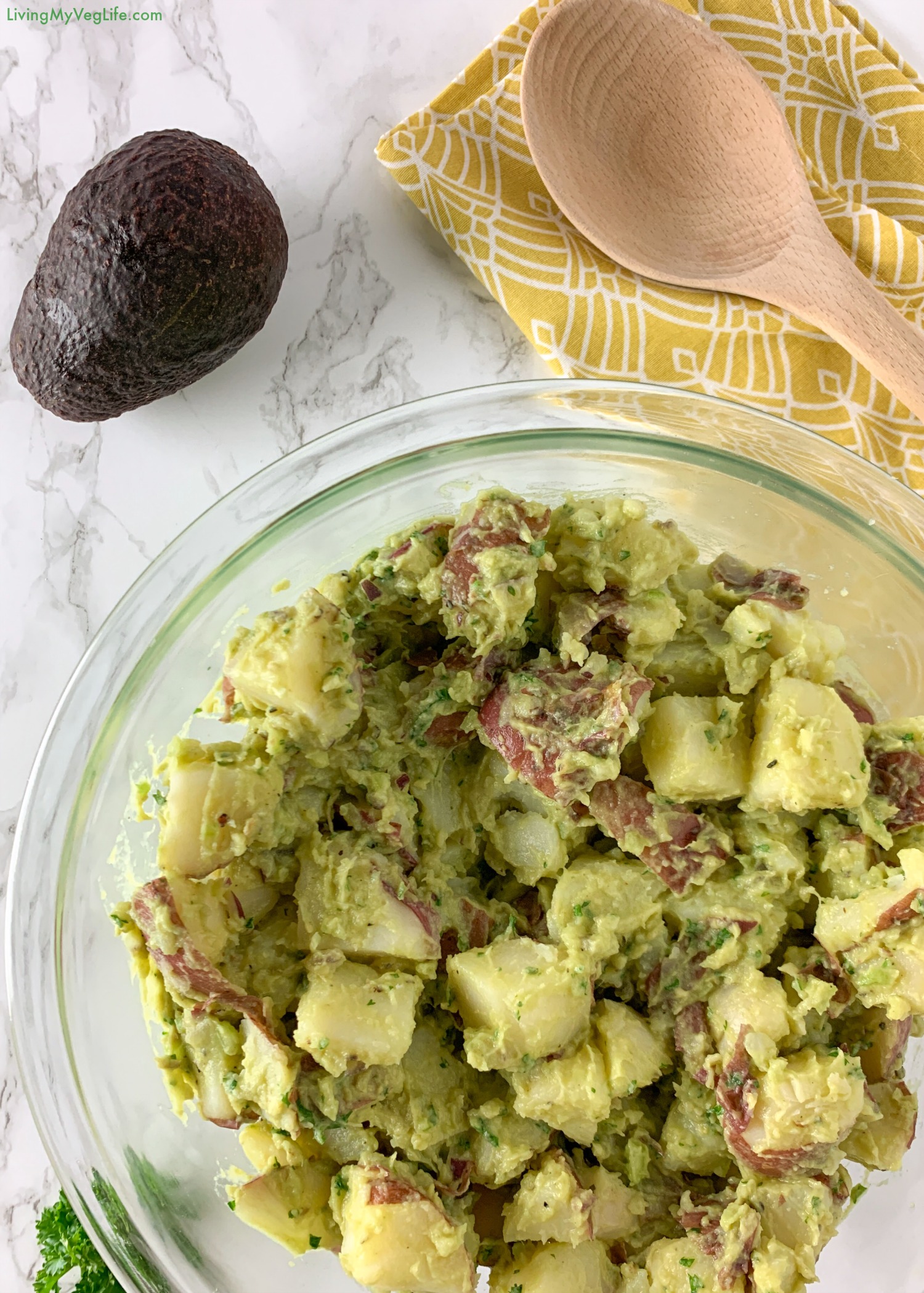 If you want all the creamy deliciousness of potato salad without the unhealthy fats found in mayonnaise, give this Vegan Potato Salad with Avocado a try!

Vegan Avocado Potato Salad is a perfect side dish to make for a summer picnic or cookout, and even if all of the guests aren’t vegan, it’s still a yummy, healthy alternative to a dish covered in mayonnaise!

Of course, you can always make a Vegan Red Potato Salad with store-bought vegan mayonnaise, but to avoid as much processed food as possible, I suggest giving this a try. 😋 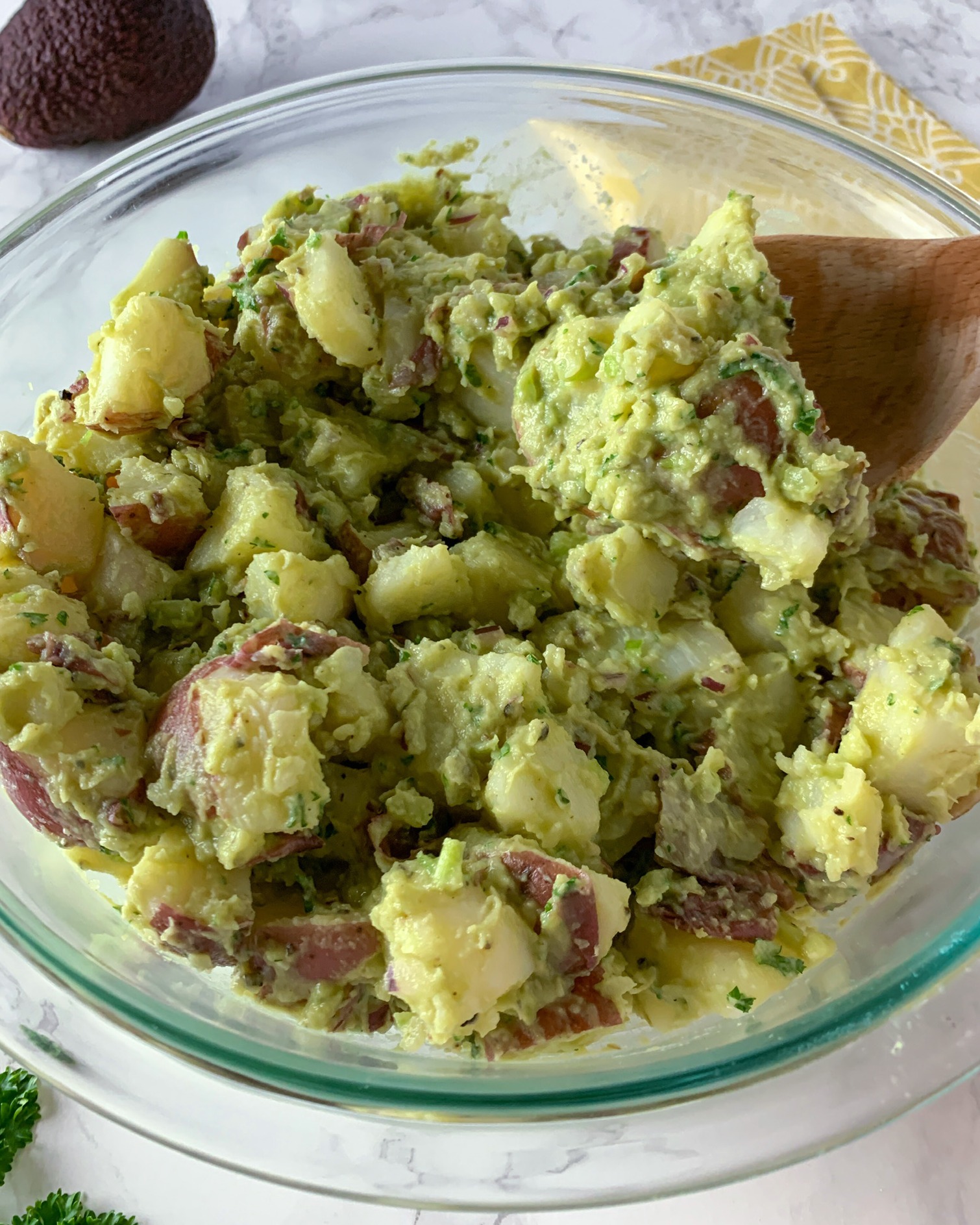 You might feel like you’re making guacamole while making this Vegan Potato Salad, but trust me, it will not taste like guacamole. There are many ingredients in this recipe that you would never add to guac, and they give the dish a unique flavor!

There are two parts to this recipe — boiling the potatoes and making the avocado mayonnaise replacement — and you can do do the second part while you wait for the potatoes to cook!

In my opinion, boiling potatoes is so stressful! Potatoes come in all different shapes and sizes, meaning they all have different cook times. To make this as easy as possible, try choosing red potatoes that are all about the same size.

Start by washing your red potatoes and placing them in a deep pot. Fill the pot with some water, making sure that the potatoes are completely covered. Always boil the potatoes with the skins on. Even if you plan on removing them later, the potatoes will get too soggy if they are boiled without their skins. 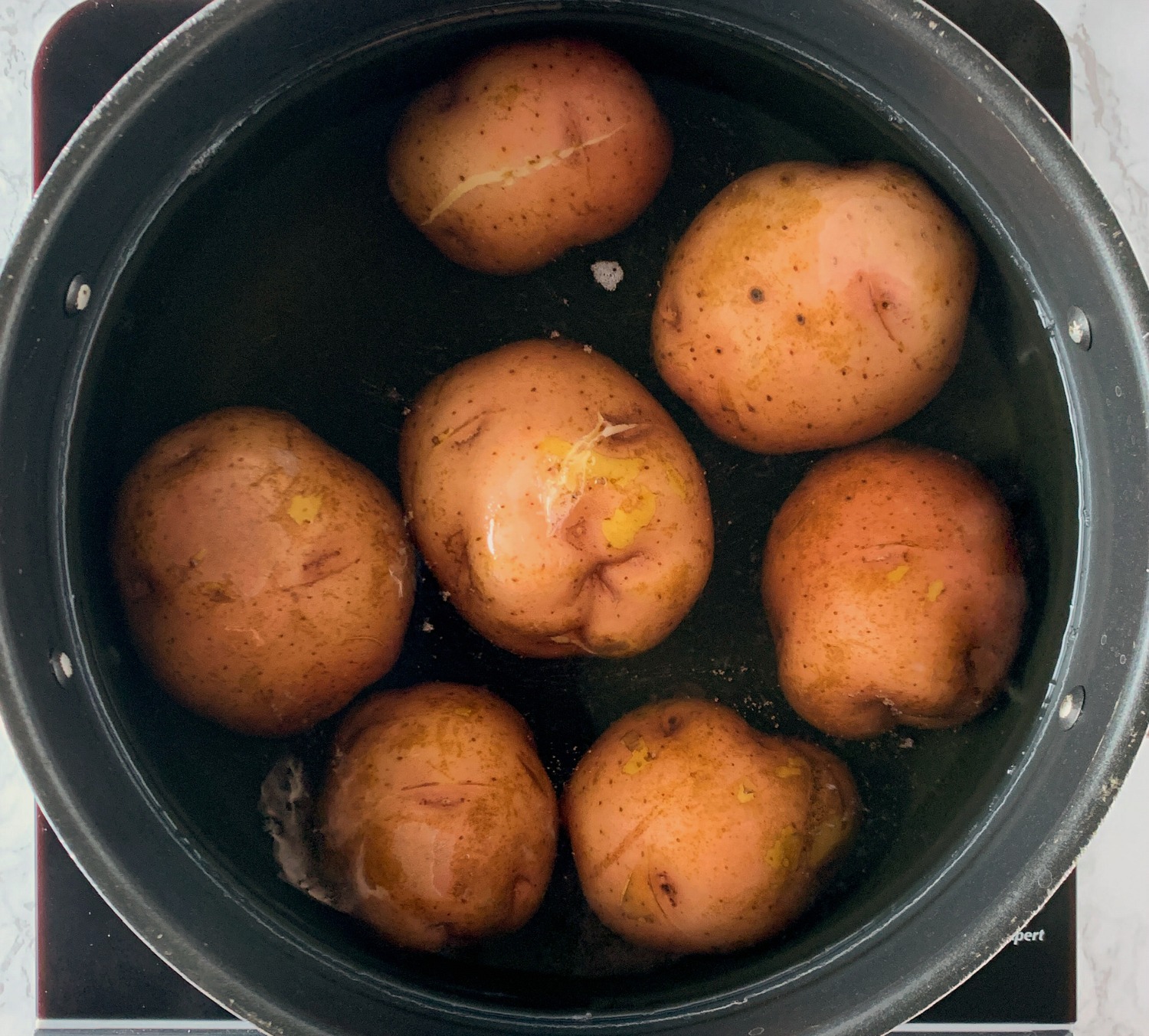 Place the pot on the stove and turn it on high. Once the potatoes start to boil, bring the pot to a simmer and cook until the potatoes are fork-tender (should be about 30 minutes).

After the potatoes are fully cooked, place them in a strainer to cool. You can run them under cold water if you want them to cool down faster. Or, place them in the refrigerator.

Let the potatoes cool completely before trying to cut them. If they are still warm, the skins will fall off as you cut them!

While the potatoes are cooling, you have plenty of time to make the mayonnaise replacement. As I said earlier, this will feel a lot like making guacamole, but with very different ingredients. 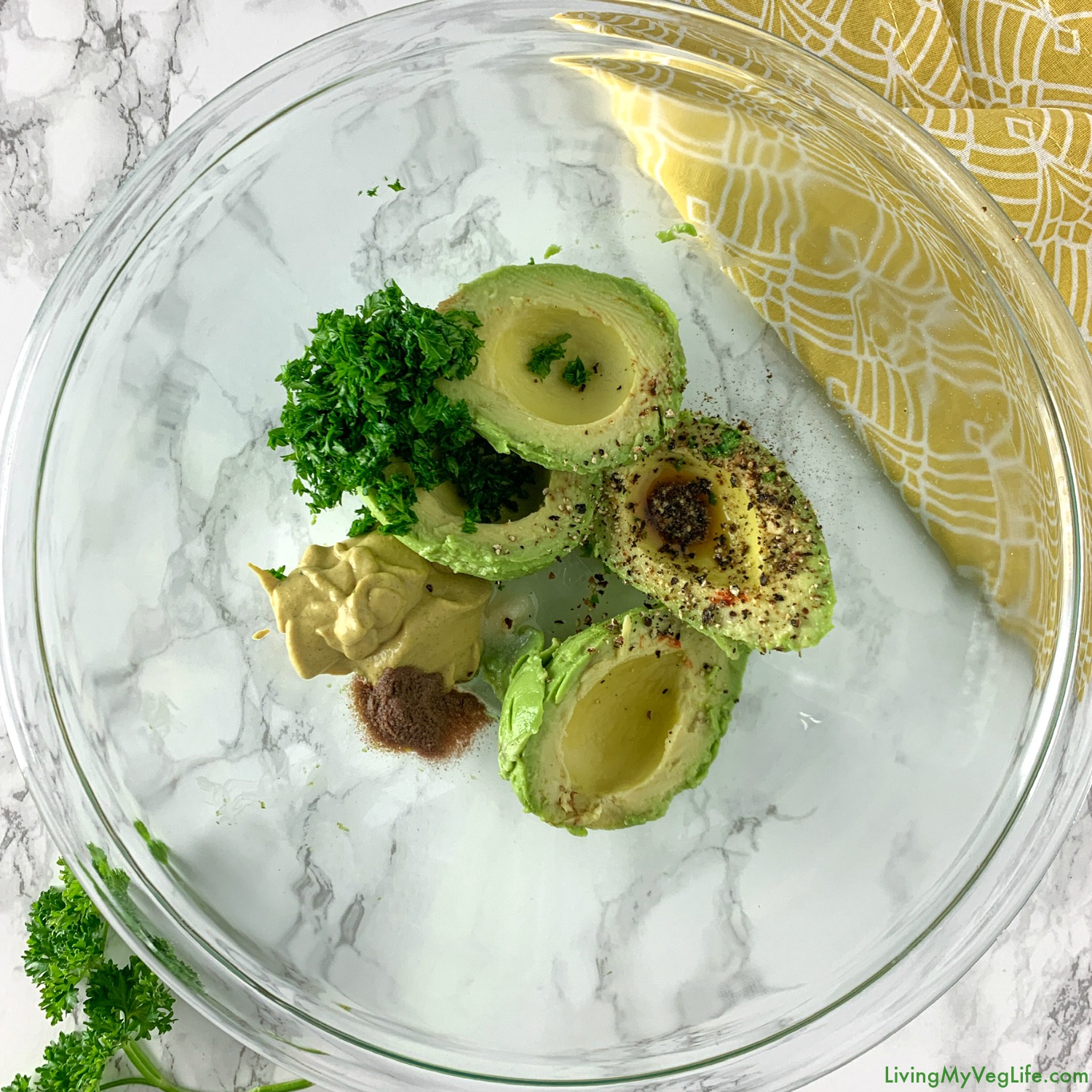 Start by mashing all of the soft ingredients together, including the avocados, dijon mustard, apple cider vinegar, and seasonings. There will probably be some avocado chunks left in there, and that’s totally fine! But, if you want it to be a perfect paste, use a food processor to blend these ingredients together.

Finely chop the celery and red onion and add them to the mixture. These ingredients give the potato salad a little crunch, so you don’t want to mash or blend these. You can add the chopped parsley at this time as well, or add it when you mash the soft ingredients. 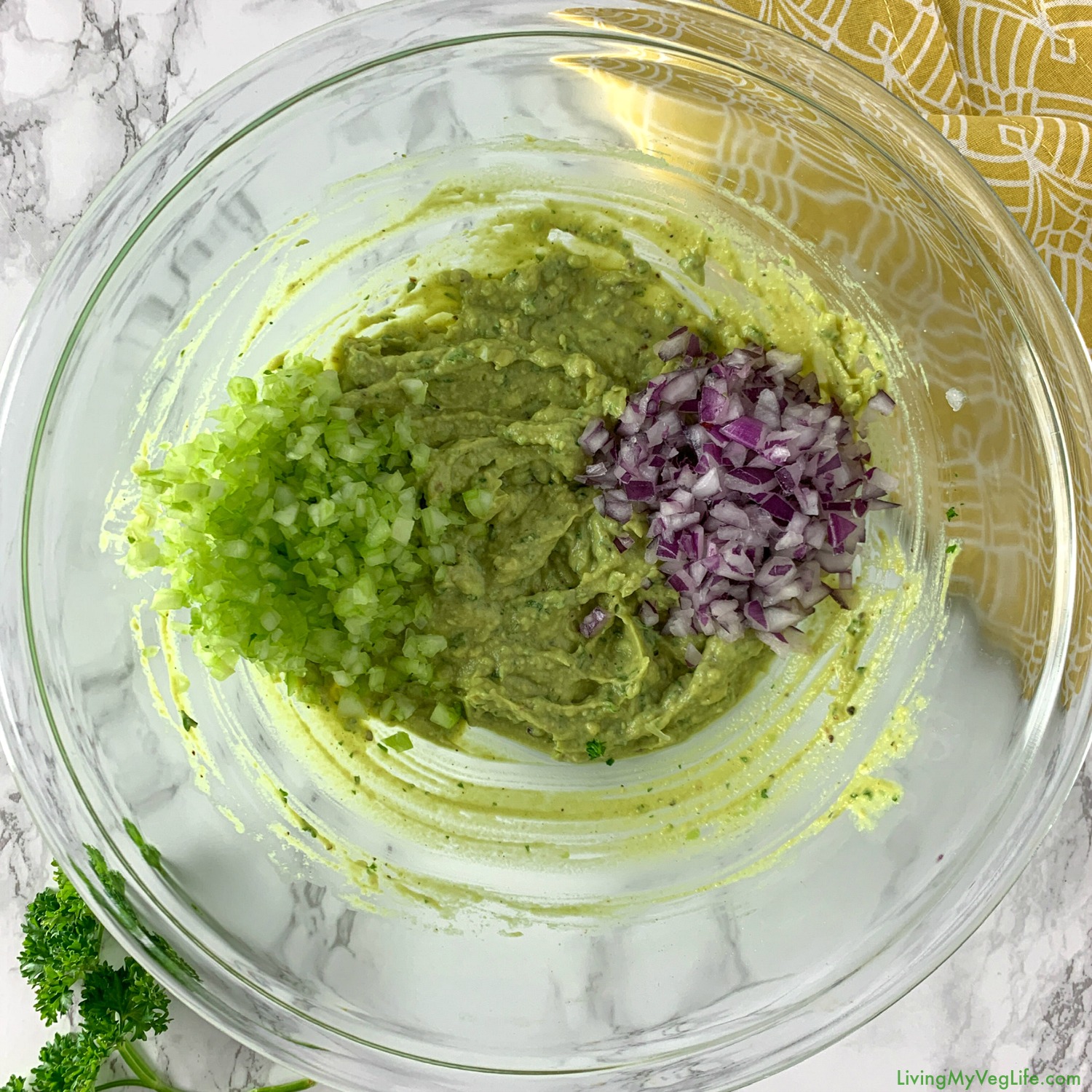 There is an optional ingredient, Kala Namak (aka black salt), but it’s only because it can be hard to find. I think this is the key ingredient to the recipe because hard-boiled eggs are sometimes added to a potato salad.

Because Kala Namak tastes so much like hard-boiled eggs, a Vegan Potato Salad with Black Salt tastes the most similar to a traditional potato salad. 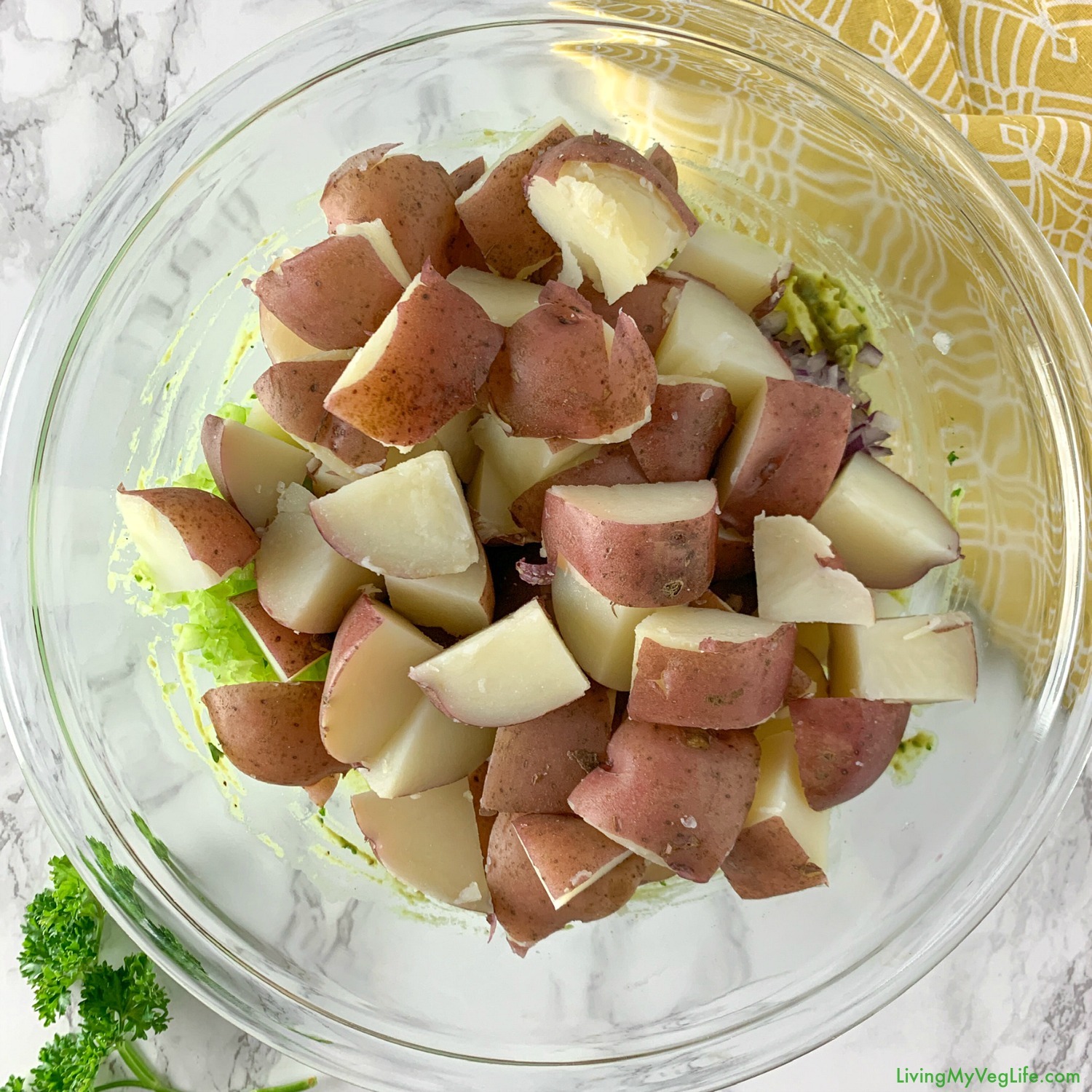 When the potatoes have cooled, chop them into small chunks. Fold them into the avocado mayo replacement and add salt and pepper to taste!

Because avocados turn brown when they are exposed to oxygen, it is best to eat the potato salad as soon as possible.

Although it tastes best fresh, it is completely safe to eat the next day; it might just taste a little more bitter. Store the potato salad in an airtight container to expose the avocado to as little oxygen as possible! 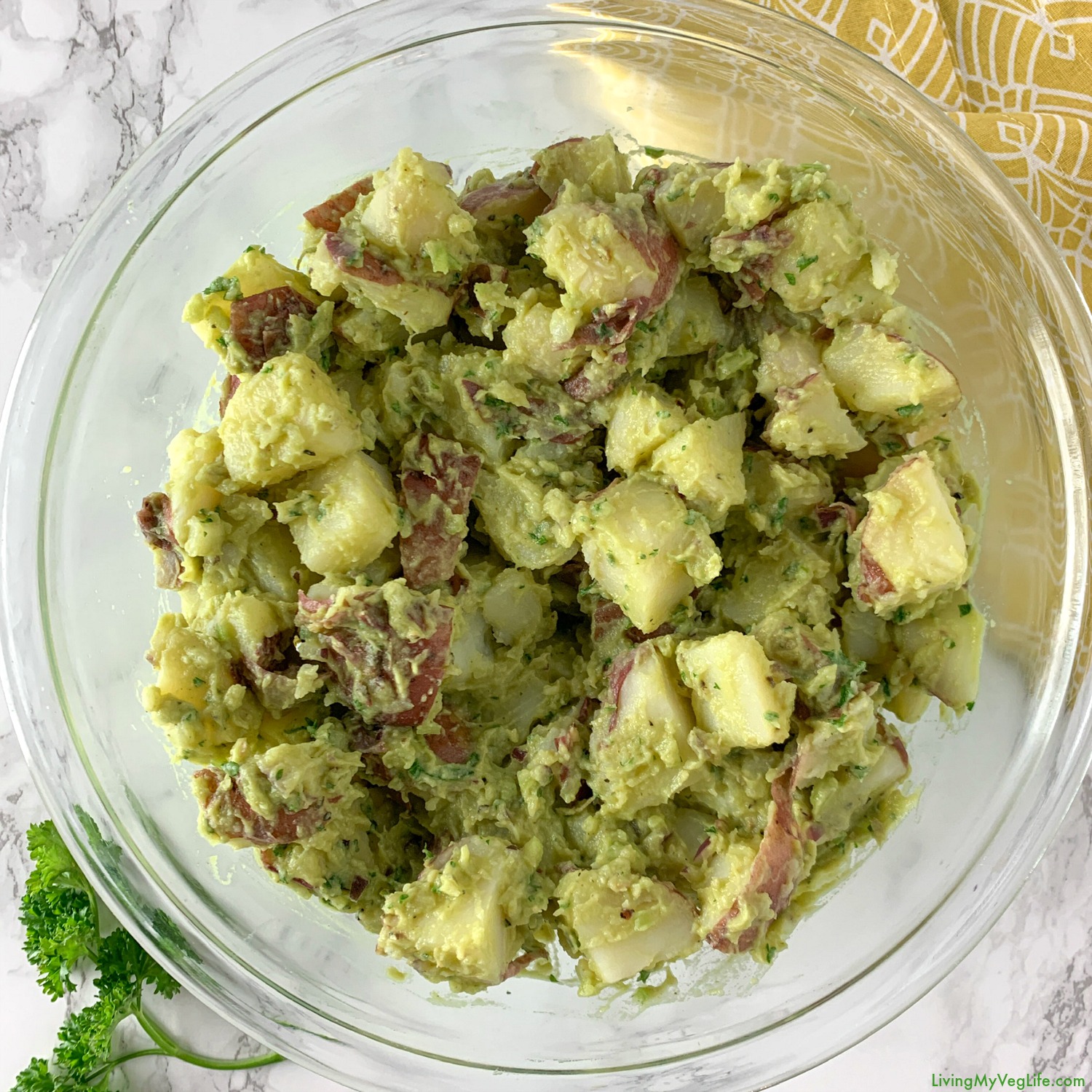 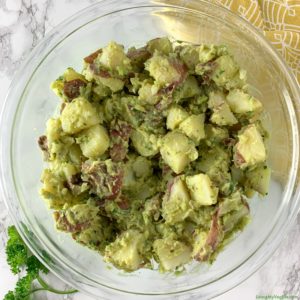