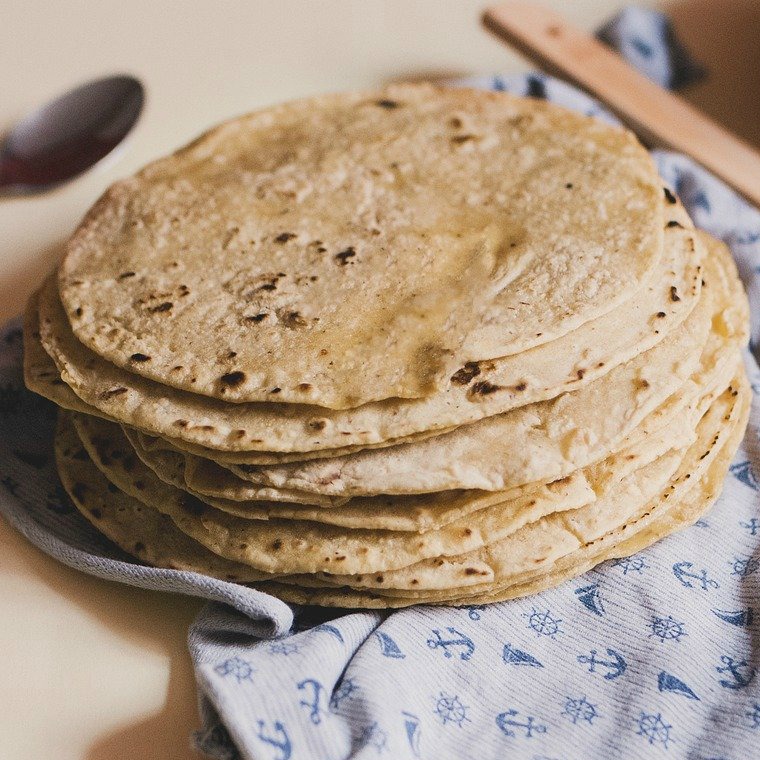 You swap ground meat for tofu taco crumbles and you choose a vegan cheese brand to sprinkle on top. And just as you’re about to roll the perfect vegan burrito, you stop and ask yourself, are tortillas vegan?

It’s probably not something you’ve given much thought to before going vegan. Flour and corn tortillas should be made of just that — flour and corn.

But the hard truth is this: Not all tortilla brands are vegan.

While most brands of tortillas won’t list any obvious animal products, such as milk or eggs, they are usually pretty processed, and as the ingredients list grows, so do the chances of an animal product being added.

To find out which brands of tortillas are vegan, you have to carefully read the ingredients and make sure all of them are vegan. Or, you can contact the manufacturers directly ask them if their products are plant-based.

If you’re looking to see if a particular brand is vegan, you can jump to my complete list of vegan tortilla brands. At the end, I also included a few brands that are not vegan-friendly so you can stay away from them.

If you’re looking for a specific type of vegan tortilla, click on a category below!

The following brands have whole wheat tortilla varieties that are also vegan!

365 Everyday Value is Whole Foods Market’s own brand, and many of their products are organic — including some of their tortilla varieties!

This brand of tortillas is a good choice if you’re looking for flour or corn tortillas made with organic and no-nonsense ingredients.

Where to Buy: You can buy 365 Everyday Value products at Whole Foods or online from Amazon.

If you’re looking for vegan tortillas or wraps, you can’t go wrong with Angelic Bakehouse, because all of their products are vegan!

This brand is focused on making its products delicious but also nutritive by using non-GMO ingredients like sprouted whole grains.

All our products are totally free of animal products.

Where to Buy: You can buy Angelic Bakehouse products directly from their online store, or in many different retailers, such as Sprouts, Whole Foods, The Fresh Market, Costco, Target, some Walmart Supercenters, and Giant Eagle.

If you’re trying to find a healthy vegan wrap that’s also gluten-free, BFree wraps are a perfect option for you!

Where to Buy: You can buy BFree food products online at Amazon, or in-store at many retailers, including, Publix, Kroger and affiliates, Harris Teeter, Stop & Shop, Meijer, Giant, and more!

Plant-Strong by Engine 2 was founded by Rip Esselstyn, as seen in vegan documentaries Forks Over Knives and The Game Changers. The Engine 2 diet is a vegan diet that does not include oils or refined foods.

Where to Buy: You can buy Engine 2 products at Whole Foods Market or Amazon.

Food for Life is dedicated to making products that help vegans get hard-to-get vital nutrients by using nutrient-dense ingredients!

All Food for Life Tortillas are vegan and made with organic whole-food ingredients. And, two varieties are gluten-free (GF)!

Where to Buy: You can buy Food for Life products online on Amazon or on Shop Gourmet. Or pick them up in a store near you, including Whole Foods, Sprouts, Publix, Kroger, and more!

Flatout doesn’t make tortillas, but they have many varieties of wraps you can choose from! Although they are not labeled vegan, we can determine from their ingredients that they are plant-based.

In case it is a concern, some varieties do contain non-organic sugar, which is plant-based but not always vegan. The varieties that contain sugar will be labeled with an asterisk (*).

Where to Buy: You can buy Flatout Wraps products online at Amazon, or pick them up in stores like Walmart, Giant Eagle, Publix, Winn Dixie, Safeway, Albertsons, and more! Use the Flatout Store Locator to find a specific product!

As their website states, Greenleaf Foods is committed to shaping the future of plant-based foods! This company produces the vegan brands Lightlife Foods and Field Roast Grain Meat Co.

They also own the brand Raw Wraps, a plant-based wrap that makes wraps out of fresh produce. All Raw Wraps are certified vegan and gluten-free!

Where to Buy: You can buy Raw Wraps products online from their website, Amazon, or Raw Living (UK). You can find them in-store at many health food stores. However, you probably won’t be able to find them in many general retailers.

La Tortilla Factory has many vegan tortillas as well as non-vegan tortillas, so always be sure to read the ingredients. Many of their tortillas are not vegan because they contain honey.

Most of their tortillas are non-GMO (besides their traditional varieties) and they also have some gluten-free varieties. Pay close attention to whether the products are labeled “wraps” or “tortillas” below. (The flour wraps are vegan, but the flour tortillas are not.)

Where to Buy: You can buy La Tortilla products directly from their website or at many major retailers.

All of Maria and Ricardo’s Tortillas are certified vegan, Kosher certified, and non-GMO. With organic, flour, corn, gluten-free, and grain-free varieties, there is something for everyone!

Where to Buy: You can buy Maria and Ricardo’s products online at Amazon, or find them in stores at Whole Foods, Shaws, The Fresh Market, and other health food stores.

All Mi Rancho Organic Tortillas are vegan-friendly, and there is a wide variety to choose from.

This brand labels all of their organic varieties as vegan, but they don’t do this for other varieties. So, it’s best to stick with organic!

Where to Buy: You can buy Mi Rancho products online on their website. You can also find them in stores at Whole Foods and other health food stores.

One of the most popular brands of tortillas, Mission Tortillas are all vegan! Don’t even bother reading the ingredients! Here’s a statement from their website:

We do not use any animal-derived ingredients in any of our tortilla products, making them vegetarian and vegan friendly.

Where to Buy: You can buy Mission Tortillas online at Amazon or at many major retailers, including Walmart, Kroger, Publix, and more!

NewGem Foods tortillas are made out of fruits and vegetables. According to NewGem’s website, all varieties are vegan, gluten-free, and non-GMO!

Where to Buy: You can buy NewGem tortillas online on their website or from Amazon. They are also available at retailers like Whole Foods and Wegmans.

NUCO Coconut Wraps are a gluten-free and low-carb alternative to normal bread wraps and tortillas.

NUCO wraps are made with very few ingredients, including coconut meat, coconut water, and coconut oil.

Where to Buy: You can buy NUCO wraps on the NUCO Online Store or Amazon. You can also find them at some health food stores.

Pure Wraps are all vegan-friendly, gluten-free, and made of 2–3 ingredients!

Where to Buy: You can buy Pure Wraps products online on the Pure Wraps website or on Amazon.

While some of Rudi’s gluten-free bread options are not vegan, their tortillas and wraps are!

They make it clear on their FAQs that the enzymes in their tortillas are plant-based and not derived from an animal source.

Where to Buy: You can buy Rudi’s products in the freezer section or the bakery shelf of select health food stores and grocery stores.

Siete Foods products are all vegan, including their tortillas! They are also all grain-free and gluten-free.

Siete tortillas, as well as our tortilla chips, hot sauces and dips are super-duper vegan.

Where to Buy: You can buy Siete Foods tortillas online on the Siete Foods website or amazon. You can also find them in-store at many different retailers, including Walmart, Sprouts, Publix, Target, Kroger, and more.

Tortilla Brands that Are Not Guaranteed Vegan

CHI-CHI’S tortillas are arguably one of the more popular brands of tortillas, but because they are not certified vegan, you have to be careful of the ingredients.

If you sort through their longer ingredients lists, you’ll see that shortening made out of mono- and diglycerides is usually listed. Because this is sometimes an animal product and they don’t label it as coming from a plant source, it’s best to stay away from these products.

Some of these products don’t contain mono- and diglycerides but do contain enzymes, which again, can be either animal or plant-based, and they don’t specify which.

La Banderita is another popular brand of tortillas, but unfortunately, very few varieties are vegan.

It seems like the preservatives added to La Banderita products make them not vegan. If you look through the ingredients list in almost any one of their tortillas, you’ll see one of the following ingredients that is not vegan: mono and diglycerides, calcium carbonate, enzymes.

These ingredients are not definitely from an animal source, but because the brand didn’t specify that they’re not, we can’t say for sure that they are vegan.

The only variety of La Banderita tortillas that are vegan is the Ready to Cook variety. Because you have to cook these before eating, many of the non-vegan preservatives are not included.

Another brand that you often see at grocery stores, Old El Paso tortillas are not very vegan friendly and a good brand to stay away from.

While their hard shells might be plant-based, their soft flour tortillas are concerning, as they contain mono and diglycerides and enzymes, which may or may not be vegan.

If you liked this guide, check out my other Vegan Brands Guides!

If there is a brand of tortillas you want me to review and add to this list, let me know in the comments below!