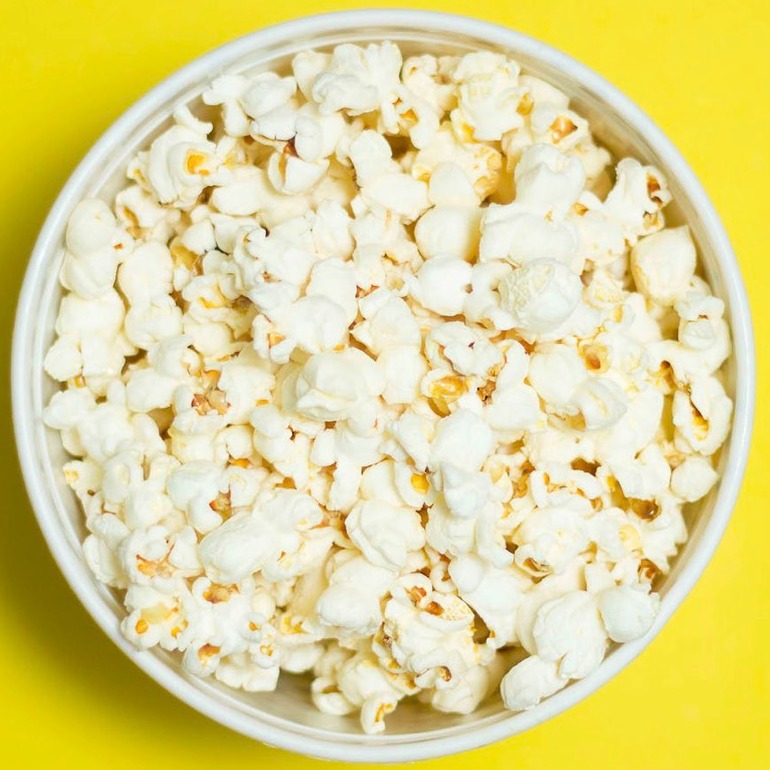 Contrary to what many people think, not all popcorn is covered with butter. So, is popcorn vegan? Sometimes! But, always watch out for added ingredients, which are likely to be made from animal products.

✅ Popcorn (meaning the unflavored, popped corn kernels) is completely vegan. But, many of the commonly added flavors are not vegan, such as butter.

Why is Some Popcorn Not Vegan

Popcorn, in its basic form, is just corn. To make popcorn, you just have to heat corn kernels. After heating them for a period of time, the pressure inside of the kernel builds until it suddenly ruptures and expands. So, popcorn is naturally plant-based until other ingredients are added to it.

The reason that popcorn is often not vegan is because a commonly added ingredient is butter, which is a dairy product. Because popcorn is often served this way, it’s easy to forget that you don’t have to add butter to popcorn.

You also don’t have to add butter to popcorn to make it taste good! If you’ve ever tried a plant-based butter before, you know that a buttery flavor is pretty easy to match without using animal products.

To make something taste “buttery,” you usually just have to add something with a lot of fat in it, such as oil. Some oils taste more like butter than others, and sunflower oil seems to be a favorite for vegan popcorn brands.

Butter isn’t the only culprit, however. There are tons of non-vegan popcorn flavors out there, and some of them are pretty obvious. Steer clear of popcorn flavors that use animal products in their names, such as cheddar and bacon-flavored.

How to Tell if Popcorn is Vegan

There are generally three different kinds of popcorn you can buy: microwave popcorn, pre-popped popcorn, and movie popcorn. You might have to go about it a little differently for each, but to determine if a brand is vegan, you have to find out if every ingredient is vegan.

A good place to start is to see if the product lists any allergens. Because many popcorn flavors are dairy products, a warning will often be written on the product that includes dairy.

It will usually say something like “warning: contains milk.” If there is a warning for any non-vegan allergens, like milk or eggs, you can be sure that a popcorn brand is not vegan.

But, just because there is no warning on the package doesn’t mean that the product is pant-based. There are many non-vegan ingredients that do not have to be listed as a warning, such as honey or meat flavorings. So always double-check the ingredients list even if there is no allergen warning.

Going through these ingredient lists can be difficult, especially if you are unfamiliar with tricky non-vegan ingredients. For example, your eyes might scan right over disodium insonate, but this common flavoring ingredient is usually derived from fish.

To make things easier, I put together two lists of ingredients that are commonly found in the microwave and popped popcorn brands. One list is for the vegan-friendly ingredients and the other is a list of ingredients to watch out for.

🚫 Non-Vegan Ingredients to Watch Out for: Mono and Diglycerides, Cheese, Milk/Milk Powder, meat flavors (like bacon), natural flavors (might be plant-based, but usually not — avoid if the product isn’t labeled vegan), whey, Sodium Caseinate, Lactose

Determining if movie popcorn is vegan is more difficult than with the store-bought brands. You can’t just flip over the bag of popcorn and read the ingredients.

To tell if a movie theater’s popcorn is vegan, it’s best to contact the movie theater before you go. You don’t want to wait until you get there, as many times the people working won’t have the answer. Also, some people aren’t completely sure what vegan is (they might think it’s the same as vegetarian) and incorrectly tell you that their butter-smothered popcorn is plant-based.

If you’re looking for a specific movie theater, check out the list below to see if I have already contacted the movie theater or found their allergen guide.

AMC popcorn is vegan! They pop it in coconut oil. You can see AMC’s allergen information here.

Regal popcorn is usually vegan. However, Regal informed me that the ingredients vary from theater to theater, so always ask when you go.

While it’s hard to find an allergen guide on their site, you can always contact Regal directly.

You can either flip through the different popcorn brands using the left and right arrows, or scroll up to see the full list of plant-based popcorn brands! You’d be surprised at how many accidentally vegan popcorn brands there are. And with many of these, you won’t even know that the butter is missing!

Notes about the Vegan Popcorn Guide

Yes, all of the popcorn at Walt Disney World is vegan! They serve Pop Secret popcorn and the "butter" is plant-based.