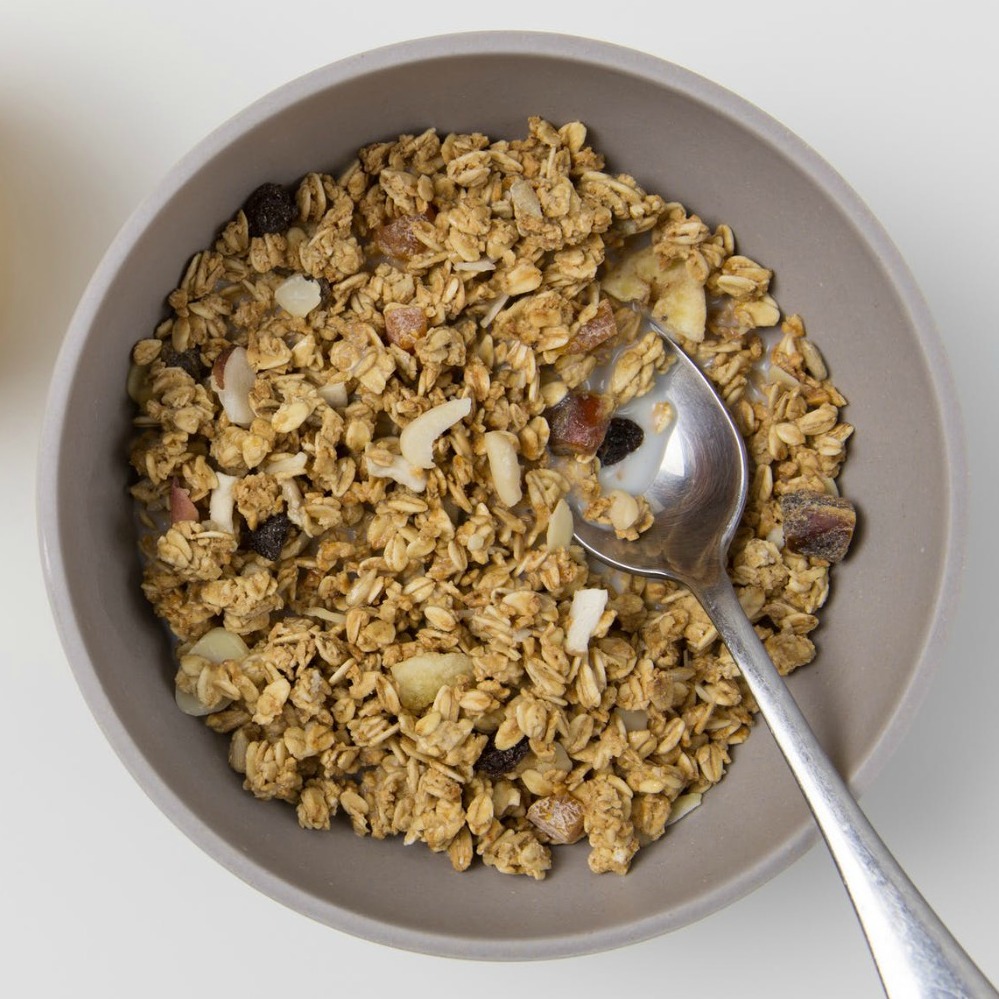 Just because you swap your regular milk for a plant-based milk doesn't mean your breakfast cereal is vegan. Like many other processed foods, not all cereal brands are plant-based.

Whether you're checking to see if a cereal you already have is vegan, or if you're looking for a new brand to pick up at the grocery store, this guide will help you quickly find the perfect vegan cereal brand for your needs.

Are you looking to see if a specific brand of cereal is vegan? If so, jump to my complete vegan cereal list!

I can't possibly list every single cereal product out there, and if I only listed the products that were vegan,  you'd have no way of knowing if a cereal not included on the list wasn't vegan or if I simply didn't look into it.

If you don't have a specific brand in mind and are just looking for vegan cereal recommendations, skim through the highlights below to find products that you'd like.

While the term "healthy" is subjective, I can say that generally, vegan cereals are healthier than many other non-vegan brands of cereal. That's because cereal is always processed to some extent, but non-vegan brands tend to be more processed than their vegan alternatives.

To find a healthy vegan cereal, look for two things:

Nature's Path Cereal has many vegan options to choose from, and their website makes it incredibly easy to spot vegan options. Just look for the V under their cereal products to be sure it's plant-based.

Nature's Path Cereal is always organic and focuses on using real food ingredients that you can recognize on the label. See their website for more information.

While they don't have as many vegan choices as Nature's Path, the Cascadian Farm plant-based cereal options are pretty healthy choices.

All of the cereals are organic and use whole food ingredients with limited preservatives. For more information, see their website.

Another often organic cereal brand, 356 Everyday Value, has many vegan options to choose from. You can find this brand at Whole Foods store on Amazon. See their website here.

This brand offers many copycat popular cereal brands that are healthier than the original version — while also making them vegan!

While many healthy cereal brands focus on whole grains and short, understandable ingredient lists, others focus on protein.

The problem with adding protein to cereal is that brands often add animal sources of protein, such as whey protein.

If you're looking for a protein-loaded vegan cereal, turn your attention to Kashi.

If it's the protein you're looking for, you have to check out Kashi GO cereals. The other Kashi cereals are healthy, but the GO variety is focused on protein.

Each flavor has the protein per serving labeled on the front of the box, and many of the Kashi GO flavors are vegan! See their website for more information.

Check out the vegan Cinnamon Crisp variety — it has 14 grams of protein per serving!

It can be tough to find cereal brands that are both vegan and gluten-free, especially considering the already small list of plant-based cereal brands.

Luckily, many brands that consider the plant-based eaters also look out for those who need to avoid gluten.

Here are some brands that offer gluten-free vegan cereal:

Once again, Nature's Path tops the list. Not only is it incredibly easy to find vegan cereals in their long list of products, but it's just as easy to find those that are vegan and gluten-free.

While you're scanning their list of cereals, just look for the ones with both a "V" and "GF" listed at the bottom, which stand for vegan and gluten-free.

All but one of Barbara's Puffins cereals are vegan, and a few of these flavors are gluten-free! See their website for more information.

These are the plant-based, gluten-free Puffins varieties:

You can find GreenWise cereal at Publix.

Notes about the Vegan Cereal Guide

Why Are Some Cereals Not Vegan?

Ingredients that are never vegan:

Ingredients that are sometimes vegan:

Is vitamin D in cereal vegan?

If a brand of cereal is fortified with vitamin D, it is almost always vitamin D3, which is not guaranteed to be vegan. There are two kinds of Vitamin D: vitamin D2 and D3. Both of these vitamins are generated with the help of UV radiation from the sun, but they can come from two different sources.

If a cereal brand is fortified with vitamin D3, it cannot be considered vegan unless it clearly states that it is plant-derived. Most cereal brands do not state this, and some brands (like Kellogg's) have clearly stated that their vitamin D3 is from an animal source. So as a vegan, it is best to stay away from cereal that is fortified with vitamin D3, even though there is a slight chance that it might be plant-based.

If there is a brand of cereal you want me to review and add to this list, let me know in the comments below!