Naan is a flatbread often served with Indian cuisine. Unlike pita bread, the main ingredients of naan bread are usually animal products including any of the following: milk, yogurt, buttermilk, ghee (clarified butter), and eggs. If you are dining at a restaurant, don’t assume the naan is vegan!

The easiest brand of Naan bread to find in stores is Stonefire, but Stonefire naan is not vegan-friendly. Because naan isn’t as popular as other types of flatbreads, like pita bread, there usually aren’t that many options to choose from. But, you can always order Vegan Naan Bread Brands online!

There’s good news about ordering these flatbreads online: These vegan naan brands can usually last in the freezer for 6 months or more! So you can order them in bulk and heat them up when needed.

For each of these naan brands, I’ll link a product locator so that if you happen to live next to a store that sells them, you can buy the vegan naan bread instead of ordering them.

Trader Joe’s naan bread is not vegan. Many people ask about this brand because TJ’s has a lot of vegan products, but their naan bread contains milk.

Keep in mind that ingredients are always subject to change. Be sure to read the ingredient labels before ordering and contact manufacturers with any questions.

Toufayan Bakery makes a variety of bread products, including wraps, flatbreads, bagels, tortillas, and chips. You can check out their product certifications page to see which products are vegan, gluten-free, organic, non-GMO, and more. Both of Toufayan Bakery’s naan breads (original and garlic) are vegan! They will both last up to 8 months in the freezer.

You can order Toufayan Bakery’s naan breads in bulk from their Amazon store, but you also might be able to find them at your local grocery store! Use their product locator to see if there is a store near you that carries Toufayan Bakery products. (I buy their pita bread at Walmart, and they are my favorite!) 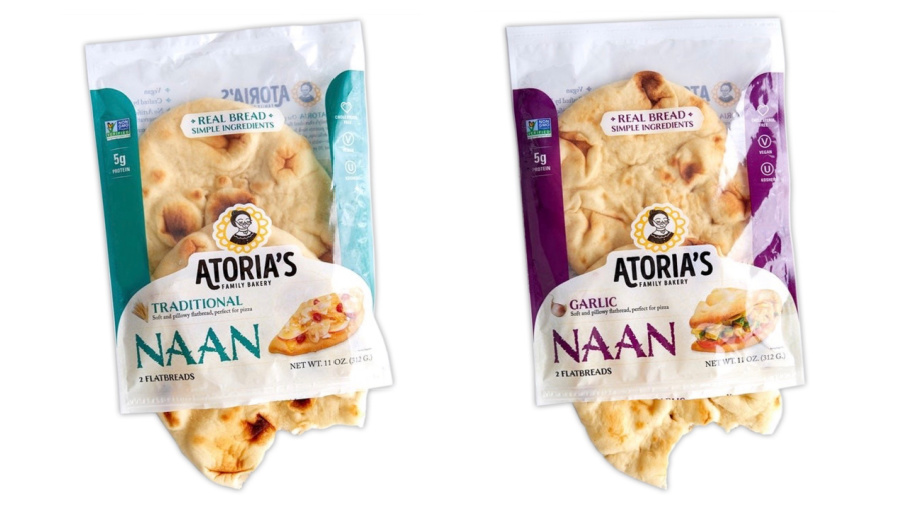 Atoria’s Family Bakery makes flatbreads, including lavash, naan, pita, and regular flatbread. All of their products are certified vegan, kosher, and non-GMO! There are two varieties of Atoria’s vegan naan bread: garlic and traditional. These naan breads will last up to 12 months in the freezer and 3 weeks in the refrigerator.

You can buy Atoria’s Family Bakery plant-based Naan Bread in bulk directly from their website or from their Amazon store. If you would prefer to buy them at the store, check out their store locator to see if they are sold at a retailer near you!